St. Louis Asphalt Sealing & Striping uses the highest-quality polymers and paints to provide a long-lasting finished look to your surface!

Straddling I-44W, Eureka began its life as a village in the 19th century as a railroad camp.  While the 19th century was all about railroads in Eureka, the 20th century brought asphalt paving Eureka, automobiles and growth.

History of Asphalt Paving in Eureka 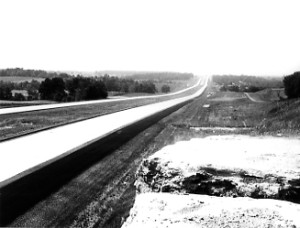 The link between growth and the automobile is lore.  With the automobile, individuals had the freedom to travel long distances without worrying about tired horses or frequent train stops.  Americans could come and go as they pleased!

There were downsides to traveling by automobile in the early 20th century.  Roads were frequently of dirt or gravel.  Your route was usually dictated by gas stations along the way.  Travelers would bounce from one oasis to another, in the direction of their destination.  If the gas station was closed, travelers simply had to wait for it to open back up again.  Very few businesses were open all night, with most closing at 6pm.  After the shops closed, the road-weary explorers had to get comfortable in the car and wait out the night.

What America needed was a standardized road surface.  The surface must be quick to install, be relatively cost effective and easy to maintain.  The only available product that fit all of these requirements was asphalt. Asphalt paving soon swept throughout the country, with Missouri leading the way.  The first contract was awarded and construction started for the first interstate project…right in St. Charles County.

Over the decades since, thousands of miles of asphalt paving has been installed, maintained and replaced throughout the United States.  Eureka residents have endured I-44 maintenance operations many times over the last 50 years.  One fact is certain; asphalt paving is not going away anytime soon.  Asphalt is quick to install, easy to repair and frugal on maintenance costs.

While asphalt isn’t going away, it will deteriorate over time.  A well-maintained asphalt surface will last 30 years or more, if properly sealed and cared for over it’s lifetime.  Even the stone roads of the Roman Empire have eroded from the effects of water, sand and time.

Are you looking at a worn, crumbling or sun-bleached asphalt surface in Eureka?  Have you struggled with trying to fix potholes in your driveway or parking lot?  We can help.  We’re St. Louis Asphalt Sealing & Striping.  We have been installing asphalt paving Eureka for over 20 years and would love to give you a reason to smile!